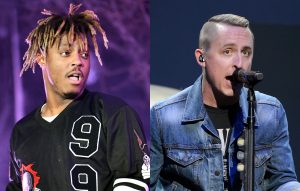 Yellowcard have sued Juice WRLD for
£11.5million ($15million) over the rapper’s hit song ‘Lucid
Dreams’, which they claim plagiarised parts of their 2006 song
‘Holly Wood Died’.

The pop punk group – which announced their disbandment in 2016
and played their last show the following year – filed the
complaint on Monday (October 21),
Billboard reports. It names Juice WRLD, his ‘Lucid Dreams’
co-writer Taz Taylor and producer Nick Mira, along with the
associated publishing groups and record labels.

Yellowcard allege that Juice WRLD copied “melodic elements”
from ‘Holly Wood Died’ “without license or consent”. Their
complaint reads, “The Infringing Work and Infringing Sound
Recording are not only substantially similar to the Original Work,
but in some places virtually identical.” The band also provided a
chart that analysed both songs, noting similar elements like hooks,
vocal melodies and melisma. Hear both songs below:

We and our partners use cookies to personalize your experience,
to show you ads based on your interests, and for measurement and
analytics purposes. By using our website and our services, you
agree to our use of cookies as described in our Cookie Policy.

In their complaint, the band also point to Juice WRLD’s open
admiration for emo rock and pop punk music, specifically his love
for the Fall Out Boy album ‘From Under the Cork Tree’ – whose
producer Neal Avron also produced Yellowcard’s 2006 album
‘Lights and Sounds’, which ‘Holly Wood Died’ appears
on.

“Since it is very common for a fan of works produced for an
artist by a specific producer to listen to other works by that same
producer,” Yellowcard state in their complaint, “it is likely
that Defendant Juice WRLD’s appreciation for the album ‘From
Under the Cork Tree’ led to exposure to Yellowcard’s album
‘Lights and Sounds’ and the Original Work ‘Holly Wood
Died’.”

Yellowcard are asking for damages “in excess” of
£11.5million ($15million), and a “running royalty and/or
ownership share” in ‘Lucid Dreams’ or statutory damages
“for each act of copyright infringement”’. They are also
asking for Juice WRLD and the other defendants to be “permanently
enjoined” from exploiting ‘Lucid Dreams’ in the future.

Last year, ‘Lucid Dreams’ producer Nick Mira claimed (in a
series of now-deleted tweets) that Sting, whose song ‘Shape
Of My Heart’ is interpolated on the Juice WRLD track, was suing
them despite already
receiving 85% of royalties from the song.

This ‘Lucid Dreams’ lawsuit comes on the heels of other
high-profile plagiarism claims against rappers and hip-hop artists.
Two producers recently alleged that Lizzo
denied them credit on her hit song ‘Truth Hurts’, while
another singer has accused Lizzo of
plagiarising her work on her single ‘Juice’. Earlier this
month,
Lil Nas X, Cardi B and the producers of their collaboration
‘Rodeo’ were sued for copyright infringement.

Gene Simmons says the “collateral damage” of #MeToo is “heinous”